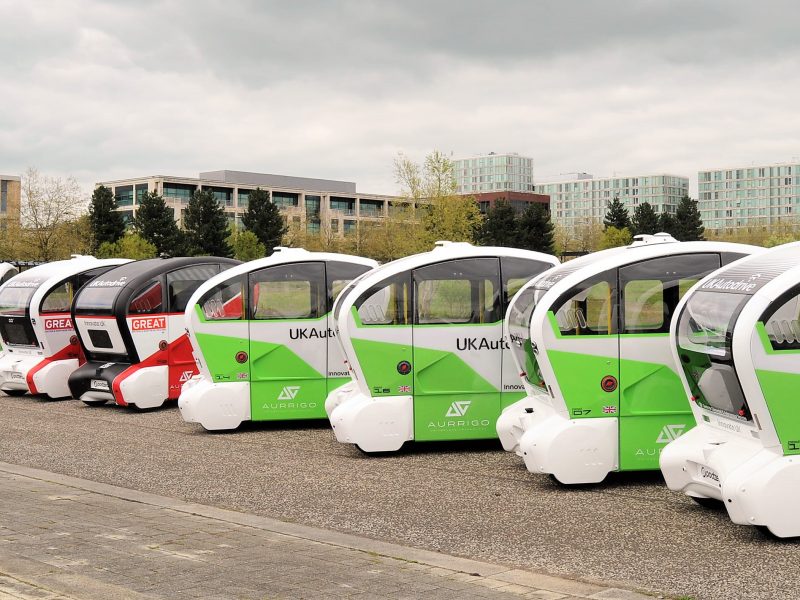 Engineers at the firm have been working through the night to build the pods, in order to meet the requirements for what is currently the largest ‘first and last mile’ transport trial in the world.

Ten pods are now finished and being fine-tuned for their autonomous control systems before they will form part of the whale (the collective name for a fleet of pods) that could be doing up to 120km of journeys every day.

Just another day testing in Milton Keynes! With 10 Pods now on site and more to be delivered this week, we’re really gearing up for our demo phase this summer.

Dr Richard Fairchild, Director of Autonomous Mobility Programmes at Aurrigo, commented: “This is another major milestone for UK Autodrive and our country’s desire to be at the forefront of new transport solutions.

“Importantly, it is also a massive breakthrough for our business, as we now not only have the autonomous technology in place, we also have a production line capable of being ramped up to deliver pods in low and medium volumes.”

He continued: “We have been testing the first two vehicles around MK and there has been plenty of interested onlookers asking us questions, some of which were a lot more technical than we expected.

“Having a ‘whale of pods’ to test will deliver the data and user experience we need to turn this project from a trial into an everyday part of Milton Keynes life.”

Aurrigo has invested heavily in the development of a control centre in the town centre and has recruited the first three people to support the roll-out as part of what will eventually be a ten-strong team.

This gives the company the presence on the ground it requires to safely and effectively oversee the testing before it goes live with passengers in the Summer when up to 40 pods – capable of travelling up to 15 miles per hour and lasting up to 60 miles off one charge – will operate from Central Station to Campbell Park and Silbury Boulevard to Avebury Boulevard.

Richard concluded: “We want to get people talking about driverless vehicles as a possible solution for the ‘first and last mile’ part of the journey. The more pods people start seeing, the more the conversation will gather pace.”

UK Autodrive, which is funded by Innovate UK, is an ambitious three-year project that is trialling the use of connected and self-driving vehicles on the streets of Milton Keynes and Coventry.