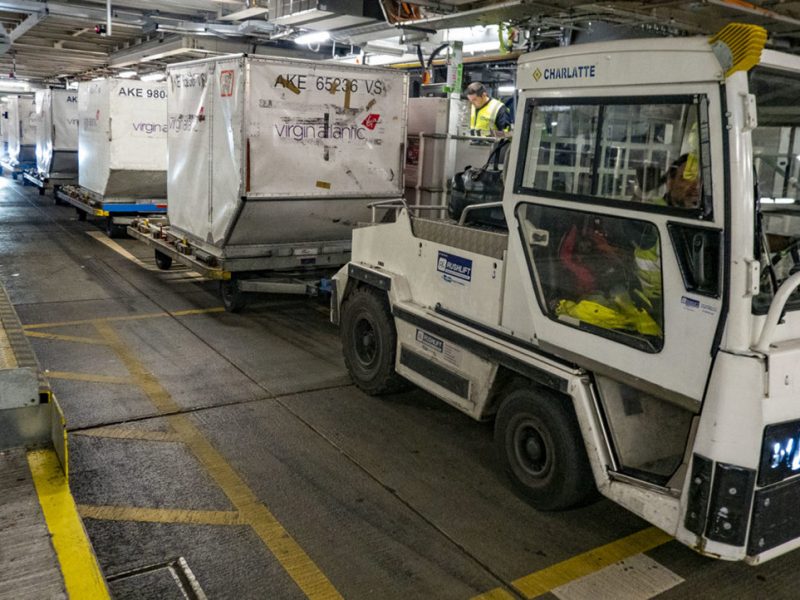 The company behind a new autonomous dolly being tested at Heathrow Terminal 5 has launched its second new product for the aviation sector.

Aurrigo’s technical engineers have successfully developed a new Transport Safety System (TSS) that can be used to reduce the number of incidents involving baggage and cargo containers falling from towed dollies due to them not being locked down correctly.

Each dolly will have an electronic control unit and sensors fitted to it that communicates wirelessly to another control unit mounted in the tow tug. Warnings are then provided to the driver through a display screen and, if necessary, the tug will be immobilised if luggage is lost or locking is not correct.

The UK-based firm are already in talks with several global airlines, ground handling companies and airport operators about implementing this solution on thousands of vehicles that play such an important role in airport life.

Miles Garner, Sales & Marketing Director at Aurrigo, commented: “Our work with International Airlines Group (IAG) and British Airways on the autonomous baggage dolly has given us the opportunity to explore some of the other issues facing the aviation sector and our engineers quickly identified a way of solving the costly issue of incidents involving damaged baggage and ruined cargo.

“There are hundreds of incidents every year where crashes happen due to driver error or the units not being stacked or locked in properly. Our Transport Safety System can help eradicate a lot of these as the tugs will not be able to move until everything is in place and, importantly, drivers will be immediately made aware if the situation changes.”

He continued: “The way we have designed our system means it can be easily retrofitted to tugs and dollies currently in use or be integrated into the build process for new models.”

The launch of TSS comes just a few weeks after Aurrigo completed the second phase of testing for its autonomous baggage dolly at Heathrow Terminal 5.

Working in partnership with International Airlines Group (IAG) and British Airways, the company’s innovative solution offers the ability to reduce emissions and improve efficiencies in getting passenger bags to and from the terminal.

Unlike the current operation, they will depart for the aircraft as soon as each one is full, speeding up the loading process and reducing passenger waiting times.

Miles concluded: “We have built a track record for delivering manufacturing solutions and autonomous controls in the automotive sector, but, in the past year, we have also proven this expertise can be applied to improve the efficiency of the aviation sector.

“There so many opportunities in this field and we’re hoping that the introduction of TSS and the autonomous dolly will lead to further exciting collaborations.”

Categories
Recent News
Archive
Ready to join the autonomous revolution?
Get In Touch
(c) Copyright 2020 Aurrigo. Aurrigo and Podzero are registered trademarks.
Back To Top